Learn how to identify the symptoms of sudden cardiac arrest (SCA) and empower employees with the equipment and skills needed to transform themselves from bystander to lifesaver.

According to the Heart and Stroke Foundation of South Africa, cardiovascular disease is the leading cause of death in South Africa after HIV/Aids. Without immediate medical attention a person suffering SCA has a 90-percent chance of dying.

Dr. Kreyan Kasvalu, CEO of Medical Emergency Training and Services (METS), says: “Chances of survival can be increased by as much as 80 percent if an automated external defibrillator (AED) is used to resuscitate a patient within the first two minutes of sudden cardiac arrest.”

What is an AED

An AED is a battery-operated, computerised, electronic medical device no bigger than a shoe box. AEDs are designed to be used by bystanders with no experience, but first-aid training, including the administration of cardiopulmonary resuscitation (CPR), is advantageous.

When turned on, most AEDs will instruct the user through each step with voice commands. Upon opening the device, one will notice white pads. These have electrodes and removable adhesive protectors, which reveal a sticky surface to be stuck on the patient’s chest.

“Sensors in the pads pick up if a heart is fibrillating, or shooting off irregular electric impulses. Only if an abnormal heart rate is detected will the device deliver an electric shock in an attempt to restore a normal rhythm,” says Kasvalu.

When to use an AED

It is important to note that an AED is used only to treat SCA and not victims of gunshot wounds, or other medical emergencies as seen on television. “SCA is usually caused by ventricular fibrillation (VF) and ventricular tachycardia (VT).

Put very simply, SCA is a condition in which the heart suddenly and unexpectedly stops beating normally. This prevents the proper flow of blood to vital organs and the person collapses to the ground and becomes unresponsive,” says Kasvalu.

Doug Smit, head of cardiac emergency response planning at Sere-med, says: “Sudden cardiac arrest can happen to anyone, anywhere, at any time. Unlike a heart attack or stroke, when one suffers cardiac arrest, the victim has between four and six minutes to be treated in order to have any chance of survival.”

Why use an AED

Smit says: “Over 100 000 people die annually in South Africa from SCA. More than 80 percent of these incidents occur outside of a medical facility. An AED helps ordinary people to provide defibrillation quickly.”

While training is not required, it does provide people with the knowledge of how to react when an emergency occurs. “All METS training courses include an AED component which is of international standard. METS also offers an AED implementation programme for workplaces or companies that are looking at introducing AEDs into their working environment. This will ensure that an AED doesn’t remain a decoration on the wall when needed,” concludes Kasvalu.

South Africa lags behind First World countries when it comes to the provision of AEDs in the workplace. When recognising that, in the case of SCA, time is of essence, and the only way to return a patient’s heart rate to normal rhythm is by using an AED, it becomes a worthwhile investment for any company.

Steps to follow in the event of sudden cardiac arrest:

• Look for an AED

• Remove all clothing from the patient’s chest

• Turn the machine on and listen for verbal commands

Prev Mining possibility
Next At the heart of the matter 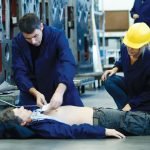